Last night I popped along to the monthly Sci-fi Book Club at Manchester's Madlab. Under the microscope was William Gibson's first novel, Neuromancer, heralded as being the most famous early "cyperpunk" works. Everyone had been really excited about reading this one, but I have to admit that it eventually mainly left me cold, with too many significant moments that were tricky to follow, didn't tie up properly or were plain discarded almost as soon as they had been typed. Some became clearer after returning to sections and going through them again and others made a bit more sense after reading round the subject (which I did once I'd finished the book, so as not to spoil the fun); it could be that it was the language that I found confusing rather than the concepts. 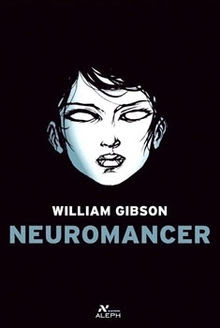 Neuromancer isn't all bad, and has more than a few nods to Philip K Dick, who I like. Here are some: 1). The controlling AI Wintermute takes its name from Dick's novel VALIS. 2). The opening sequences in the future noir underworld of Chiba City, Japan, have resonance with Deckard's dystopian dirty downtown LA in Bladerunner, which we all know is adapted from Dick's Do Androids Dream of Electric Sheep? 3). The Panther Moderns' hi-tech camouflage suits are similar to the scramble suit in Dick's A Scanner Darkly, as is the paranoia, and the drug addiction, plus...

Next up for the reading group is Ursula K Le Guin's The Left Hand Of Darkness , apparently one of the first works of feminist science fiction. (The next meeting is on Tuesday 18 May at 7pm.)

We've also decided on the second batch of books for the reading list; Term 2, if you like. There will be more about this in my upcoming guest blog spot on The Manchester Lit List, which I'll crack on with now if you'll just give me half a chance.

ADDENDUM 28/04/10: I'm busily squirrelling away at the aforementioned Lit List piece and have been having a shufty round t'internet, where I found fellow Madlabber Dave Hartley's new post on the last meet.
Posted by Sarah-Clare Conlon at 10:34 AM