If you have never before wandered the ringing marbled halls of Manchester's Royal Exchange theatre, it is worth going merely to peruse the building. Watching a play here is even better: until 8 May, I can recommend The Comedy Of Errors by some bloke called William Shakespeare. The usual high standard of costumes and props (although the Perspex box is still perplexing me) is combined with some fantastic acting; so much so the olde worlde language and those darn rhyming couplets really don't detract after the first scene is out of the way.

But back to the structure, which has a fascinating past. Starting life as a bustling commodities exchange at the height of Manchester's industrial prowess, the Levitt Bernstein-designed seven-sided in-the-round internal auditorium you see today was completed in 1976, after the shell had lain empty between 1968 and 1973, when a bunch of thespians took up residence. At this juncture I'd very much like to utter the word "juxtaposition", but I'm guilty of using it too much, so I'll let this picture do the talking. 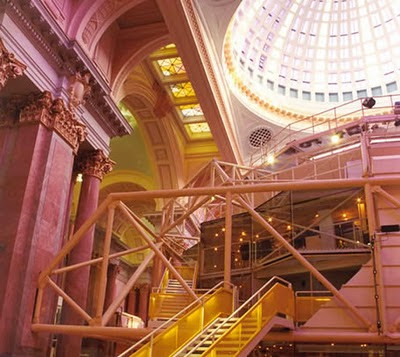 My dad tells me he saw old happy-clappy campaign singer'n'banjo player Pete Seeger in concert here back in the day; I can't stand Little Boxes, it affected me deeply as a child, but his final gig was apparently played with Arlo Guthrie, who I love (I was introduced to him by a Frenchman with a glass eye via The Story of Reuben Clamzo & His Strange Daughter in the Key of A, and I absolutely dig the ditty Alice's Restaurant Massacree), so I guess I have to let him off.

Anyway, that's by the by, and I don't even know if my dad is remembering the right place as I can't find no reference to it on the interweb and he's [whisper] getting on a bit, y'know? (You sure it weren't the Free Trade Hall there now, Paw?) Back to the building, and I learnt recently, while researching a bit of work I did for an upcoming online tourist attraction, that it took a direct hit in the Blitz, with further damage being inflicted when the IRA bomb thankfully took the hideous whirlwind that was Shambles Square out of our lives forever in 1996. Following renovation to the beautiful glass and ironwork dome (one of a few round these parts), which actually moved as well as shattered, the theatre flung open its doors once again in 1998. Phew!
Posted by Sarah-Clare Conlon at 3:44 PM