A moment of friction

(See what I just did there? The addition of one small letter from the last post I wrote. Cunning.)

That last post of which I speak was all about literary zines and groups who accept contributions. This one is about a "collaborative storytelling venture" of the graphic variety, Fractal Friction. I'll keep it brief, so you can go off and check it out for yourselves. FF currently has a merry band of six artists on board and each week publishes a page to a "comic book" artworked by one of the six. This week will see page 17 uploaded, so you can safely assume that the project has been running for 17 weeks. Anyway, submissions are invited - "we want to open it up to others, and there will be guest slots available", says the blog - just bung them an email to fractal.friction@googlemail.com if you're up for the challenge. 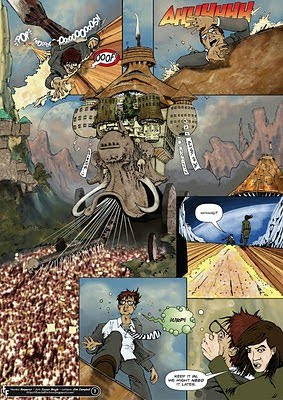 The page here (quite Howl's Moving Castle, I don't mind saying) is by Conor Boyle, through whom I found out about this Staedtler pen foray. Conor once had the loathsome task of being my next-door neighbour, adept at being polite at my pathetic attempts to see straight enough to manoeuvre a PlayStation handset. Poor Conor was also the mild-mannered janitor to a stinking fat cat and the lucky recipient of my prized pianoforte, which took a whole half a day and four grown people to push across the hall from one flat to the other. Mr B has quite a penchant for les bandes desinees, so if you check out his blogging profile at Pencilmonkeymagic, you'll find a ripe collection of links to other illustrators of both similar and also rather different works.
Posted by Sarah-Clare Conlon at 9:23 AM