Thinking I was running out of time, I finally got round to seeing Walls Are Talking at the Whitworth Art Gallery - but, happily, it seems to have been extended to the end of August, allowing me the chance to make a return visit if I so desire. It may be necessary - there are various parts to the show, exploring topics varying from imprisonment to sexuality, with some overspilling the usual temporary rooms, and I'm not sure I absorbed them all fully first time round. 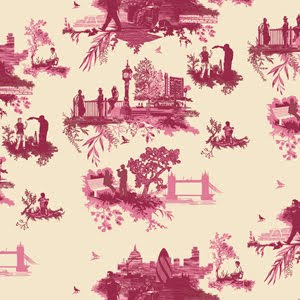 The Whitworth is the ideal place for such a project. The university-affiliated institution has an international reputation for its large collection of decorative arts, including wallcoverings and textiles, and this temporary exhibition gives it a chance to show some of these off while also borrowing a selection (thanks, partly, to the V&A in that there London) and commissioning a few more.

There's a diverse range of works, including pieces by artists such as Andy Warhol and Damien Hirst and patterns by designers such as William Morris and Timorous Beasties (who have been mentioned before on this fair site, and whose London Toile, pictured, I subsequently noticed adorning the peeling walls of The Deaf Institute, where I went for a post-art lunch). I was particularly taken by a monochrome strip of repeating pairs of eyes (rolls for sale in the shop for £29), Thomas Demand's Ivy wallpaper (now dramatically choking the entire South Gallery) and David Shrigley's Industrial Estate, with its modern architecture critique (the juxtaposition of the identical buildings but differently labelled warehouse and whorehouse made me laugh).

Our relationship with wallpaper has often been uneasy; it has always been ambiguous. By the late 20th Century, wallpaper had become a bit of a joke in artistic circles, a cliche with connotations of kitsch. But during the last 20 years, artists exploring themes of home, memory and identity have created installations with backdrops of specially designed wallpaper.

This introduction at the entrance held sway with me and made me think of my new friend David Wightman's Behemoth series at the Cornerhouse back in November. I'm going to tell him to come to this; I think he'll like it.
Posted by Sarah-Clare Conlon at 12:39 PM