On tour from the British Museum and showing at The Whitworth Art Gallery until 13 December is The American Scene: Prints From Hopper To Pollock. The fascinating (and free!) exhibition charts printmaking in the US from the early 1900s to 1960; referencing a number of schools, movements and big names (yes, including those two), and exploring various effects on the artform - from outside influences, such as politics, war and immigration, to the introduction of new techniques, including screenprinting, lino cutting and lithography (this example is Louis Lozowick's New York, 1925). 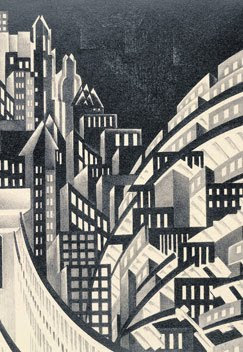 But this is pictures - what has any of it got to do with words?
Whoah there, horsey, we're getting to that bit. Back in 1947, Louise Bourgeois (remember her? Monstrous spiders at the Tate Modern ring any bells?) made her most important set of prints (she kind of moved onto sculpture soon after), He Disappeared Into Complete Silence, at the famous Paris- then NYC-based print studio Atelier 17, and the series forms part of this show. He Disappeared Into Complete Silence combines simple black and white prints (some engravings, some dry point) with a sheet of text to almost paint a picture in your head. Here's Plate 3 in the series, the text to which really conjures up an image of a poor storyteller:

"Once a man was telling a story, it was a very good story too, and it made him very happy, but he told it so fast that nobody understood it." 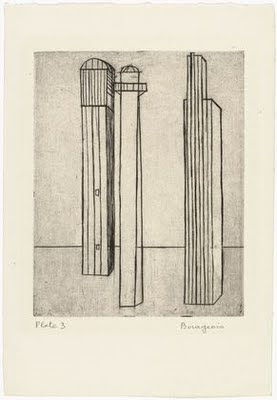 Posted by Sarah-Clare Conlon at 8:49 PM