A new weekly women's magazine launches tomorrow in six cities around the UK, and it's free. Apparently, ShortList Media will distribute 400,000 copies of Stylist in London, Manchester, Birmingham, Leeds, Glasgow and Brighton. Are they mad? Or do they at least know something everyone else in the free world doesn't?

In these recession-bitten times, Associated Newspapers have downsized their freesheet Metro, News International have bumped off The London Paper and the Guardian Media Group have decided that giving away the Manchester Evening News every weekday in the city centre just doesn't make economic sense. Meanwhile, the Evening Standard has gone from being paid-for to being unpaid-for and now the future of London Lite hangs in the balance...

But the folk at ShortList Media certainly aren't short on confidence. Just open the front page of their "flagship" title ShortList (I know, I had to force myself, too) and there's a whole sidebar harping on about its circulation and year-on-year ABC increase and prize-winning prowess.

(Worryingly, incidentally, the company's founder, Mike Soutar - yes, the man behind Nuts, that wonderful example of men's "journalism" - said that 65 per cent of ShortList's readers do not read any other men's magazine. Well, I suppose it would put even the best of us off.) 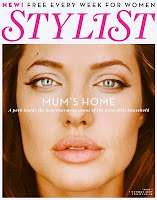 So, back to Stylist. I'll admit that there's promise - I love a good font, and the one on the masthead is good. That's a great pic of Angelina, too, and a nice close crop. The design looks clean and they've got some experienced journalists on there (the editor left the big chair at More! to join the launch).

Whether the standard of writing is up to much, however, and whether managing to drum up 17 pages of ads in a 56-page book is a viable business proposition in the long term remains to be seen. And I'm sure there are a lot of people watching intently right now...

Read more at: http://www.guardian.co.uk/media/2009/oct/06/stylist-new-womens-magazine
Posted by Sarah-Clare Conlon at 12:28 PM