Yesterday was Oxjam, which is nice. I didn't go, of course; I forgot. I picked up a flyer for the gigerama the other day and just found it again now, slipped between the pages of my notebook. Oh well. But anyway, there I was, looking at the flyer, thinking, 'oh yes, I forgot that, didn't I?', when lo, I noticed that there appear to be a couple of mistakes in the text; two, in fact. I reproduce them here, although I can't seem to reproduce the funny spacing that also appears.

Manchester’s most diverse fundraising event is taking over 9 of the nest venues throughout the Northern Quarter from 1-11pm to bring you the best established and upcoming music, art, lm, dance, comedy and poetry in the city.

I was idly musing that I don't know what a 'nest venue' is, or indeed an 'lm', and wondering if I'm just out of it, man, when the production editor in me realised that it's a printing problem, not a spello (or indeed a case of me not being down with da kidz). If you insert the letters 'fi' in front of both 'nest venues' and 'lm', they become instantly recognisable as words we all know and love. The 'fi' has gone AWOL in both cases, leaving the aforementioned funny spacing.

Squinting into the mists of my old-fashioned book publishing training, I remember that the letters f and i (and some others too, but you can go learn about them in your own time) can join together in what is called a ligature. As per the pic here for illustration, the top of the f melts into the dot of the i, and the two letters become one in a lovely embrace (or the f bites the head off the i, whichever you prefer). You don't get ligatures so much in texts produced after desktop publishing took over the world in the 80s as most of the new digital fonts didn't include them (and many were sans serif). Ligature use fell (I am reliably informed by Wikipedia) as the number of employed, traditionally trained hand compositors and hot metal typesetting machine operators dropped. (I knew a typesetter once; can't say I know any now.) 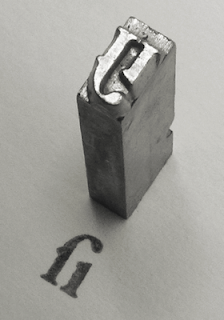 So, anyway, somehow, somewhere along the line, the two examples of 'fi' in the Oxjam flyer text have become ligatures - presumably due to a font that actually does allow this to happen (in this day and age!) - then when the file has been downloaded at repro, the font hasn't quite matched what they're working from and the ligature has upped and disappeared, all shy at the thought of appearing in print. Bless.
Posted by Sarah-Clare Conlon at 4:16 PM