The what becoming the who

Wandered into the Bloomberg New Contemporaries 2009 exhibition at the Cornerhouse yesterday totally unprepared for being as blown away by the work as I was. Really I went there a) to waste a bit of time while I was in town, b) because the galleries are nice and warm and my house is not, c) it's free and I have no money. Thank goodness for these three reasons, because now I can give you one other: d) it's well worth a visit.

Forty-seven artists are represented in the show, which runs over all three floors of exhibition space. There are paintings, photographs, sculptures, video installations - and a whole lotta talent. 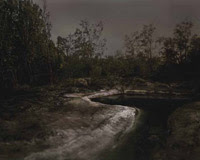 These are just some of the images I was impressed with, but I was also surprised to enjoy quite a bit of the digital video work too, especially Una Knox's When What Becomes Who.

This follows two men working for the "Preparation Department" of what looks to be a museum, busily moving large display cases and the like up and down in a vast service elevator, all the while conducting a rather philosophical conversation on, among other things, words. "How does a word come into being?" poses the older man. "To me, that's a great, great mystery." They then discuss "terms of language, grammatical structure", how "one liberates a meaning from its word" and "the what becoming the who", which has a lovely Dr Seuss ring to it.

Anyway, it's worth taking the time to sit and listen in on the lift men. Get over before the show closes on 25 October (or check it out on the London leg at A Foundation 10 November to 20 December).
Posted by Sarah-Clare Conlon at 12:24 PM