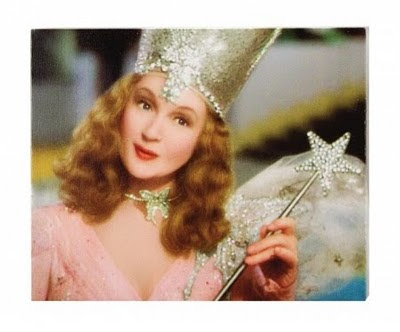 Billie Burke as Glinda in The Wizard Of Oz, 1939, dir. Victor Fleming

Christmas just wouldn't be Christmas without The Wizard Of Oz, and, despite an initial panic attack that the big day came and went without me so much as giving a passing thought to the plight of Dorothy and co trapped on the other side of the rainbow, I've done a bit of digging in the schedules and have discovered that, thankfully, I've not missed this festive fixture, which will be aired on Five tomorrow at 3.50pm.

Letting your imagination run wild in the glorious Technicolor land of Oz should provide the perfect anecdote to a New Year hangover, although I'm not so sure that the two slots scheduled to precede the film fit that particular bill. Firstly, there's The Muppets' Wizard Of Oz, made in 2005 and featuring Ashanti, Quentin Tarantino and Queen Latifah among others; then there's one of those "making of" programmes, this one patronisingly (I'm sure) hosted by the shrill Angela Lansbury. Even doped up on Pepto-Bismol and Co-codamol, I don't think I could cope with those.

The Wizard Of Oz was made in 1939, so it turned 70 some time in the past year; one reason alone to check it out now if you haven't caught it in a while. Another, for me at least, is the recent resurgence in interest in the back catalogue of film director David Lynch, whose oeuvre is patchworked with references to The Wizard Of Oz, from Blue Velvet (Isabella Rossellini's character is called Dorothy and wears red shoes) to Mulholland Drive (the jitterbug opening credits mirror the jitterbug scene deleted from The Wizard Of Oz - although it appeared in the stage version I saw during last year's panto season and had me confused as long as it took to get to a computer and look it up on the oracle of the internet).

Wild At Heart, itself 20 years old in 2010, is littered with The Wizard Of Oz imagery, not least in the penultimate scene, when the Good Witch (played by Sheryl Lee, aka Laura Palmer from Twin Peaks) floats down in a bubble and urges Sailor Ripley not to turn away from love: "If you are truly wild at heart, you'll fight for your dreams." 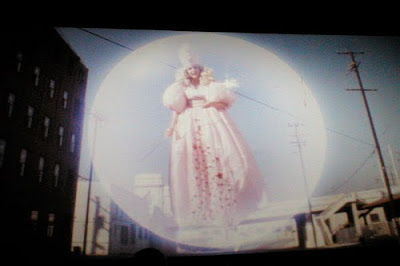 Posted by Sarah-Clare Conlon at 11:46 AM