Last Thursday, I joined fellow blogger and spare-time creative writer Adrian Slatcher at the glittering awards gala for the Oxfam Short Story Competition, part of the annual Oxfam Bookfest. Adrian had submitted a dialogue-driven piece of fiction called Buffeteering; I hadn't entered, but I was keen to see who won and why. Going on for 50 stories were apparently put forward, and the judging was done by Manchester authors Nicholas Royle, Adele Geras and David Gaffney. Nick and Adele were at the do, and kicked off proceedings by each reading some of their own work: Adele the fantastical short story Sippora; Nick a work-in-progress set in Paris that will be called either The Mask or The Hood (he has yet to decide). 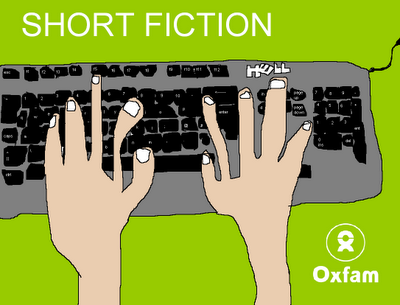 Following a brief interval, during which we were encouraged (largely unsuccessfully) to contribute to a kind of Consequences or complete a literary quiz (which Adrian subsequently won), the winners were announced in reverse order. Third came Sian Cummins with A Passive-agressive Killing Spree, second was The Humpty by Susan Bennett and first prize went to Claire Massey's Chorden-under-Water. The runners-up and winner each read the first page or so of their stories, and all sounded impressive. You can now read two of them in full on the Oxfam blog here (The Humpty to follow); a treat I will allow myself when I'm not inundated with work.

ADDENDUM 28/07/10: Runner-up story The Humpty by Susan Bennett is now up on the Oxfam site for your reading delectation.
Posted by Sarah-Clare Conlon at 11:26 AM