Saddle up and ride em cowboy

This weekend, it's all about cycling. Well, every day is about cycling for me, but I do like to encourage other people to get on their bike (to coin a phrase), and sometimes they're not all that keen to do this if they're not being accompanied by other people on two wheels. Something to do with safety in numbers, I guess. (As perfectly illustrated by this photograph of two matching bikes I spotted in the Northern Quarter on Tuesday evening. Neat.) 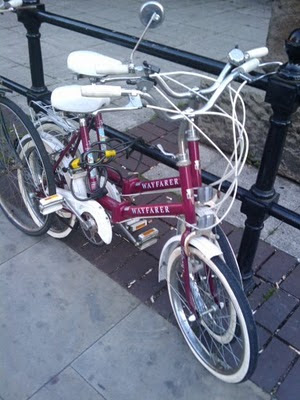 Kicking things off is the regular Bike Friday ride into town tomorrow morning, with led groups departing various points at 8am and all converging at Exchange Square for a coffee and a chat with folk from other parts of the rainy city. A couple of months ago, I tried to join the gang leaving from Chorlton Library, but I was, as usual, fashionably late and they'd set off just before I rolled up so I was always lagging behind by about 200 metres (this was back in Celia's day, just prior to retirement on her 30th birthday). Bike Friday is part of the Love Your Bike initative run by Manchester Friends Of The Earth, and the lovely Graeme told me all about the project at the "bike fair" on Albert Square on Bike To Work Day back in June. So I'm telling you. Full details on all the start points etc are here.

If, like me, you find 8am a tad too uncouth, tomorrow evening sees the monthly Critical Mass organised by I Bike Manchester (@ibikemcr on Twitter) and the inimitable Nes Bear (who posts updates on the Facebook page Manchester Critical Mass). Hoards of cyclists of all shapes and sizes, ages and backgrounds, and with all kinds of bikes (foldies, fixies, recumbents, post office, Dutch, cruisers, BMXes, mountain, racers, road, shoppers, step-through, sit-up-and-beg...) meet at Central Library from 6pm and go on an amble around town from about 6.30pm. The pace is pretty slow (all the better for not spilling beer all over my new steed, Hettie, and her marvellous spring-into-action basket) and, while the ad hoc route is often out to Platt Fields or Whitworth Park or Alexandra Park, it's not what you'd call strenuous. It's a really great way to meet fellow cyclists, promote cycling to the good people of Manchester and reclaim the streets in a friendly and non-agressive way.

On Sunday, the streets are being reclaimed using rather more organised methods as the Skyride returns for a second year. Starting at 10am, you can see the 12km (really?) route here. Lots of people took part last year, and there's plenty of "family fun" to be had, and while I'm a bit disturbed by the involvement of such a giant organisation as Murdoch's Sky, these events do raise the profile of cycling and the GB cycling team does need sponsorship. Gah.
Posted by Sarah-Clare Conlon at 10:20 AM