It’s a humid evening in Didsbury Village as we’re welcomed into the bookstore side of the Oxfam shop with a glass of white wine. Fifteen or so of us gather on the flip-down chairs and start stripping off layers.
It seems to encourage Nicholas Royle, who - despite being among as many strangers as he is friends (I’ve already spotted the poet Mike Garry when the novelist Elizabeth Baines sits down on the row in front) - pulls down the back of his T-shirt to show us his new tattoo. There, inked in ebony on his left shoulder, is the word “After”, part of Shelley Jackson’s Skin short story project. That’s quite a commitment, but Royle (pictured below) is quite committed to short stories. 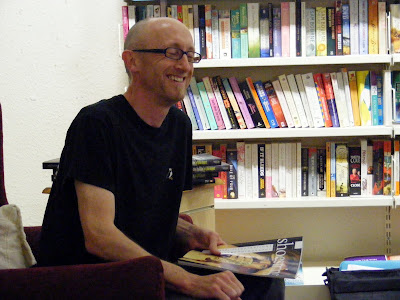 His first reading is of Pink, a story in the current issue of Shoestring (available at the Cornerhouse). The picture painted is indeed colourful, with the action undoubtedly unfolding just down the road, alongside the Mersey near Fletcher Moss.
Stepping aside, Royle introduces Tom Fletcher, whose first novel has just been published and who might count Royle as a mentor. He seems a little nervous, but his jolty delivery adds to the strange mystery of his slightly longer piece, Field. An intriguing tale, the ending is met with an intake of breath from around the room. 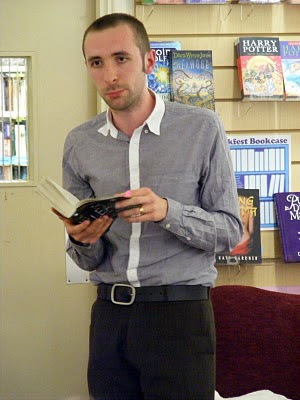 Royle is promptly back on his feet, telling of Nina in Maths Tower, which appears in The Flash, a collection of short short stories and flash fiction, compiled by local editor Peter Wild. The deconstruction of both a familiar building and an unfamiliar life is mesmerising.
Fletcher (above) rounds off the readings with the prologue to his debut The Leaping, all unanswered questions and red Saharan sand, and we’ve come full circle: from the stuffy store to the deep desert and back again.
Photos courtesy of Sharon Ring (@DFReview), who reviews the event on her blog Dark Fiction.
Elizabeth Baines (@ElizabethBaines) also talks about the evening here, as well as mentioning her own Bookfest spot (as mentioned in today's earlier post).

Oxfam Bookfest is on until 17 July. Various events will be taking place in the Didsbury branch, including readings by poet laureate Carol Ann Duffy and horror writer Conrad Williams (@Salavaria), who I also had the pleasure of meeting last night.
Posted by Sarah-Clare Conlon at 5:26 PM