Today, we're revisiting the Helvetica typeface; it seems to be quite the de rigueur topic.

Some background to the font, learnt this morning. Helvetica was developed by the Haas Type Foundry in Switzerland in the 1950s, under the leadership of Edouard Hoffmann. (The Basle foundry had dominated Swiss typography since around 1580 and became the Haas Type Foundry after the punchcutter Johann Wilhelm Haas joined the company in 1718.)

Freelance graphic designer and type designer Mark Simonson has written an article called The Scourge Of Arial (Arial isn't very popular among purists, it turns out), in which he reveals:

An icon of the Swiss school of typography, Helvetica swept through the design world in the ’60s and became synonymous with modern, progressive, cosmopolitan attitudes. With its friendly, cheerful appearance and clean lines, it was universally embraced for a time by both the corporate and design worlds as a nearly perfect typeface to be used for anything and everything. “When in doubt, use Helvetica” was a common rule.

I found all this out as a consequence of checking out the quiz So You Think You Can Tell Arial From Helvetica?, on photographer David Friedman's blog, Ironic Sans. This, in turn, was brought to my attention by my favourite author and Twitterer, Douglas Coupland, whose latest novel, Generation A, features Helvetica on the cover (the G and the C are dead giveaways). 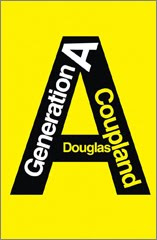 So there we go. Arial v Helvetica: let the battle commence!
Posted by Sarah-Clare Conlon at 8:42 AM