Saturday saw four of us hop on to the free tram into town (well, when I say "hop on", what I really mean is "wait ages in the cold then shuffle into a packed carriage where the windows are steamed up so you can't see out and nobody knows to move along like they do on the Tube in that there London"). We made it pretty much unscathed to St Peter's Square, where the rain had finally stopped, and negotiated our way over to the subtly impressive City Gallery.
After bumbling about slightly lost, taking in some Bridget Riley, Patrick Caulfield and Francis Bacon, and having a possible celeb-spotting moment (one of the McGanns), we finally stumbled across the somewhat strange antechamber where the exhibition we'd come for is tucked away. And if you don't find the room within a room slightly odd; the 30 or so prints hung on the walls will certainly wrongfoot you. Fantasies, Follies And Disasters: The Prints of Francisco de Goya (until 31 January) brings together etchings that were either withdrawn or withheld by the artist in the opening years of the 19th century because of the bizarre, perturbing nature of the scenes of death and the undead. Even with a slight satirical streak running through, they carry a creepy and controversial edge. 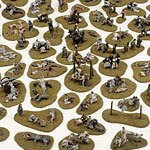 An interesting addition to the display since October is Jake and Dinos Chapman's 1993 sculpture Disasters Of War (named after one of the three groups of Goya etchings; the other two being The Follies and The Fantasies), on loan from the Tate. The multitude of scenes portrayed using remodelled toy soliders are directly inspired by Goya's more gruesome work, and the display adds a valuable extra dimension to the exhibition and gives it a depth the Goyas wouldn't plumb on their own. The idea of toy soldiers torturing and mutilating other toy soliders is a jarring juxtaposition to what we accept as the norm, but then what is normal about the concept of toy soliders anyway? Disturbing isn't a strong enough word.
Posted by Sarah-Clare Conlon at 8:59 AM