What a load of pony 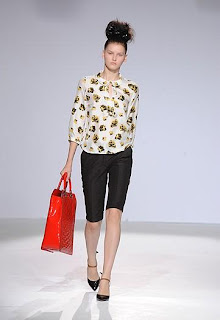 Oh dear, it's not just bankers and journos who are feeling the cut and thrust of the recession; now fashion designers are wobbling to the wall on their ultra-high heels, too. First up: English eccentric Luella Bartley, who announced yesterday that her ready-to-wear label Luella was for the chop.

This is a surprise: Bartley was crowned British Designer Of The Year in 2008 and she's been at the top of the fashionistas' cool pile for a while now. Ready-to-wear is usually where the money is made, so I suppose that's pretty much that. Shame. She put out some fun stuff - loads of quirky prints and ditzy florals, and plenty of overblown bows, sweet hearts and, if I remember rightly, Mickey Mouse ears - and one of her collections was called Daddy I Want A Pony. Now, that's a name for a show.
Posted by Sarah-Clare Conlon at 9:53 AM