A few little words about art

One of my Manchester Literature Festival chums has been busily adding to the Southbank Centre's GPS Global Poetry System project (to which we'll return at a later date), and her latest posting is most interesting to an arty-farty Francophile word lover like myself. 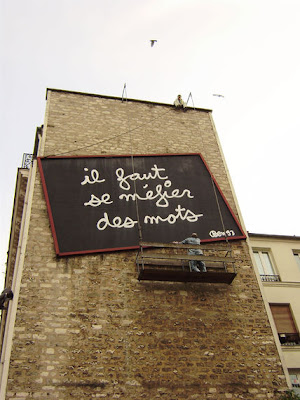 It's about an installation by the artist Ben Vautier, known simply as Ben, who lives in Nice en la belle France. It says "Il faut se mefier des mots", which means "beware of words". Well, I say.

So I've been doing a little wider reading on Monsieur Ben, who seems quite an interesting chap. There's a bit here on his life and work (nice ski goggles, Monsieur. My friend Julian has some suspiciously similar). I've learnt that some of his sculptures are not unlike Jean Tinguely's machines, an exhibition of which is on at Tate Liverpool right now and runs until 10 January: Joyous Machines: Michael Tandy and Jean Tinguely.

(When I first heard about this show, BTW, I got all excited because I thought it had something to do with the director of The Science Of Sleep and Eternal Sunshine Of The Spotless Mind, and, I just learnt, the first episode of The Flight Of The Conchords, although I was just saying yesterday how I'm not really into that, if I'm totally honest. Too much singing. Anyway, I was wrong, obviously. That's Michel Gondry. Obviously.)

So back to Ben, and you see a lot of cartes postales of his phrases on sale in trendy shops in Paris. They always remind me of Magritte's Ceci N'est Pas Une Pipe, from The Treachery Of Images series (La Trahison Des Images 1928–29). Just thought I'd share that. 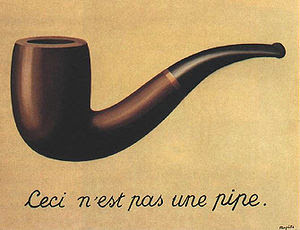 Posted by Sarah-Clare Conlon at 9:07 AM