A rather Hockneyed way of looking at things 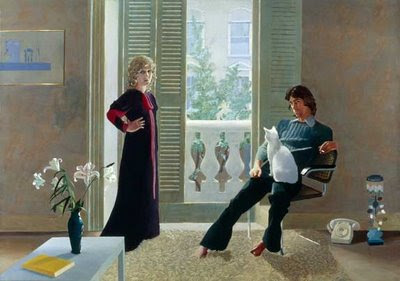 Today, I went on an exploratory tour of Liverpool with my mother. Included in our meander was a visit to the Walker because I wanted to see the Bridget Riley exhibition (more on that later this week) and my mother wanted to look at The Rise Of Women Artists, which includes a lot of Pre-Raph stuff, of which my mother, a former art teacher, is a big fan.

Anyway, while we were there, I took the opportunity to drag Mama, kicking and screaming, into the 20th century. I had been hoping to see one of David Hockney's swimming pool series, the cheeky (in more ways than one; see below) Peter Getting Out Of Nick's Pool (1966), but it's on loan to some place in Nottingham (shudder). This is a shame, but instead, and even better, the Walker has borrowed the picture Hockney did in 1970-71 of his fashion designer buddies Ossie Clark and Celia Birtwell (find out more about the threesome here, about the picture here, and some more interesting bits and pieces here): Mr & Mrs Clark And Percy (who, presumably, is the cat). Wonderful!

My old next-door neighbours, who I miss a lot and can't really explain why, had Mr & Mrs Clark and Percy hanging in their lounge. Ossie Clark (not to be confused with wine-sozzled sod Oz Clarke, with whom you can have dinner soon, if you so desire, thanks to Manchester Confidential) was born in Warrington, where one of these neighbours worked, and the pair of them picked it up in a charity shop there, if I remember the story correctly. I like the picture, and the story, and I like the fact that someone from Warrington was a fashion guru.
Posted by Sarah-Clare Conlon at 7:35 PM