Needles effort to bring poetry to the masses* 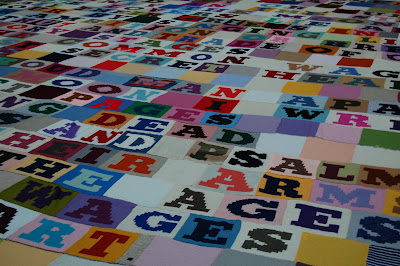 “The whole thing starts with a single knot /
and needles. A word and pen...”
from How To Knit A Poem by Gwyneth Lewis


We all know knitting has been the new black for a few years. Hugo Rifkind wrote a piece in The Times, back in 2004: "Knitting is certainly very now — its hip credentials have been trumpeted increasingly for the past couple of years. Scarlett Johansson even does it in Lost In Translation. Famous knitters reportedly include Julia Roberts, Goldie Hawn, Hilary Swank, Cameron Diaz, Winona Ryder, Madonna, Russell Crowe, Kate Moss..."

So what better way for The Poetry Society to promote its centenary than with a giant knitted poem, combining arts and crafts better than even Charles Rennie Mackintosh. The text chosen for the project was kept secret until the crafty creation (look - so big we couldn't get it all in the frame!) got its first outing at the British Library near St Pancras in London on 7 October before being moved next day to the capital's Southbank Centre to coincide with National Poetry Day. It turned out to be In My Craft Or Sullen Art by the wonderful Welshman Dylan Thomas. 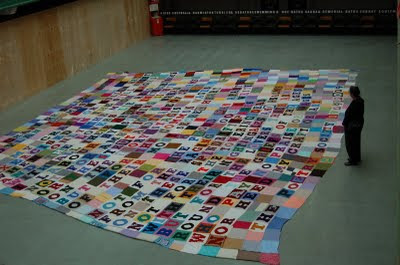 From 11 to 19 November, the poem holidayed in Swansea, providing an extension to the annual Dylan Thomas Festival (26 Oct - 9 Nov) at The Dylan Thomas Centre. Yesterday, it continued its tour of the country with a visit to the hugely interesting and impressive Victoria Baths in Manchester (which, if you get the chance, go and see - they're well worth it).

The lovely director of The Poetry Society, Judith Palmer (pictured above kneeling on the poem knitting; this photo courtesy of the Visit London blog), welcomed us to the venue and led the readings of poems that had been crafted about crafts. One person who took to the floor was Andrew Rudd, Cheshire Poet Laureate 2006 and one of my teachers at primary school, a long long time ago. Aptly his wife, Wendy, is a textile artist. Another person, perusing proceedings, was author Robert Graham, who appeared at both the recent Manchester Literature Festival and at this last fortnight's Chorlton Book Festival; whose Chorlton-based first novel Holy Joe I read not so long ago, and whose creative writing workshop I participated in as part of October's Didsbury Arts Festival. Well, I never. So much culture in one room.
Posted by Sarah-Clare Conlon at 10:01 AM