Well, won't you look at that. The Guardian is today running a feature about The Rise Of Poetry In Advertising, in which it discusses that McDonald's ad I'm a fan of and tells you what you'd already learnt via Words & Fixtures (ever the trendsetter) some weeks ago.

I was interested to discover, however, that's it's good old green champion Pete Postlethwaite who reads the I'm afraid inferior and somewhat on-bandwagon-jumping, if nostalgic Betjemanesque (so I'm told), poem on the Cathedral City ad. I do like PP, especially after seeing a) his moving bow-taking following his first-night performance as bonkers old Prospero in The Tempest at the Royal Exchange last year and b) him regularly buying The Big Issue while he was doing the Manchester run.

Back to the feature, and I do think they make a good point about bringing poetry to the masses. You can't really complain, can you? 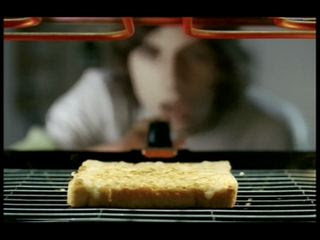 Anyway, forget that: check out that nice picture of cheese on toast. Mmmmmmmmmmmmm.
Posted by Sarah-Clare Conlon at 10:18 AM