Words & Fixtures is taking a short break for the holiday season, but would like to take this opportunity to wish everyone everywhere a fantastic festive foray.

To see you through the snow and baubles, here's a suitably Christmas-related picture; La Vierge et l'Enfant (Madonna and Child) by kitsch French artists Pierre et Gilles. (When we were stuck in Lyon last year waiting for the waters to subside, we found a really great little cafe where the barman took a shine to us and proudly showed off a portrait done of him and his husband by P et G. On another occasion, we stumbled across an establishment where everyone was absolutely ratted and screeching along to Edith Piaf. I like Lyon. Or Lyons.) 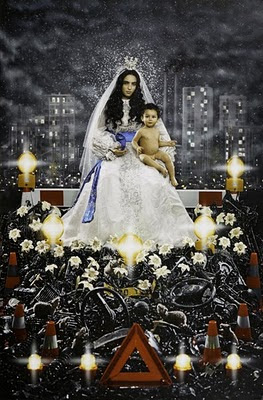 Anyway, this Pierre et Gilles installation - which features French actress Hafsia Herzi as Mary, decked out in a frock by Christian Lacroix, and which could probably be construed as virgin (sorry) on the inappropriate or controversial - was on show earlier this year in l'Eglise St Eustache in Paris. Me and the Exquisite Corpse gang mentioned earlier this week used to walk past this Chatelet church (it's the one with the giant head and hand sculpture outside) to get to Le Chat Noir, complete with a traditional zinc horseshoe bar and Turkish toilet for true French authenticity, then later in the evening ran back again to catch the last RER home.