Popped over to CUBE earlier to check out the third annual Open show before it gets tidied away on Friday. Can't say I was blown away by it, but there were a few entries that stood out as being more than just a Blue Peter project (Paul Haywood and Maxine Kennedy's Salford Red 2007 paint chart being one and Norbert Francis Attard's colourful building-specific installations, including some in Liverpool, being another. Huh, perhaps I have an obsession with colour as well as books this week). Mr Words&Fixtures seemed to like Brian Rosa's Palimpsesto Urbano: Mexico City 2008-9; a series of urban landscapes showing the reappropriation of various materials (including old election posters, billboard ads and roadwork tape) as screens and shelters. But if Mr Words&Fixtures wants to tell you about it, he can do his own blog, right? 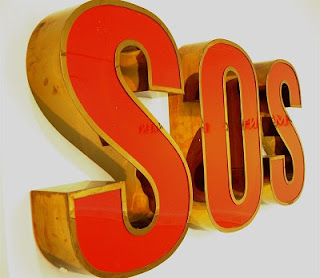 Downstairs is a special corner set aside for work by CUBEOpen 2008's winner and current artist-in-residence Andrea Booker. This is where the words come in: last year, it was her bright orangey-red SOS submission that caught everyone's eye. The three new installations are perhaps more subdued being white or clear, and use (I quote the blurb) "reclaimed and abandoned commercial signage salvaged from buildings in Manchester and Salford" to spell out a lit-up ONCE; SPILT MILK in glossy white (you might even say milky) enamelled letters, and a purposefully bent and damaged FRAIL. Apparently, "Booker supplants the original and intended message whilst retaining its connovative one, and in doing so makes a statement about social identity and displacement". Oh yeah. The exhibition also includes mock-ups of delapidated sites around the city which she aims to liven up (albeit temporarily) with her messages; keep your eyes peeled over coming months...
Posted by Sarah-Clare Conlon at 2:22 PM