It's not the winning that matters (oh, who am I kidding?)

So I'm still reeling from Wednesday night and the shock of the moment (and certainly nothing to do with the copious amount of drink imbibed soon thereafter) when the Words & Fixtures moniker was announced as the recipient of the glittering Best New Blog gong at the 2009 Manchester Blog Awards. Look at us working that logo! We wear it well, non?

The evening, which took place in the newly refurbed and reopened Band On The Wall, was compered by a very-tight-and-very-red-dress-wearing Maria Ruban, who came up against something of a challenge with her catchphrase idea (we'll just leave it at that, eh?). Prize-giving duties were taken up by Kate Feld, and winners received a book courtesy of Manchester Literature Festival, a cheque courtesy of Arts Council England and a CD bearing the aforementioned logo courtesy of, ooh I dunno - Manchester Blog Awards? The bloggers nominated in the Best Writing category gave readings, as did author and judge Jenn Ashworth (showing her immense talent for situational description, but, if I'm honest, something of a downer with its rather bleak subject matter). Various mp3 bloggers played us some top tunes as part of Bloggerpalooza, a unique music streaming event, and I enjoyed The B-52s very much through my by then drunken haze.

The judging panel included: author and Guardian columnist Naomi Alderman; Dave Carter, head of Manchester Digital Development Agency; Richard Fair of BBC Manchester; author (and former blog award winner) Jenn Ashworth; Mike Noon of Arts Council England North West, and, last but most certainly not least, Manchester Blog Awards founder Kate Feld. Apparently, one of the judges said of W&F: 'It was the only blog out of the 24 shortlisted that made me laugh out loud.' See, I said I should become a comedian, didn't I?

So here's a list of (and links to) all the movers and shakers at the 2009 Manchester Blog Awards; big heartfelt congrats to them all (and, indeed, to everyone who was nominated and shortlisted):

Best City and Neighbourhood Blog: Lost in Manchester (anonymous). One of the judges said: "Sometimes it's easy to forget to look at what's right under your nose. I love its unashamed raw passion for Manchester."
Runner-up was The Manchester Zedders (Liam Purcell and Marie Pattison).

Best New Blog: Words and Fixtures (Clare Conlon - that's me, that is!). One of the judges said: "It was the only blog out of the twenty-four shortlisted that made me laugh out loud."
Runner-up was Songs From Under the Floorboards (Andy Wake).

Best Writing on a Blog: My Shitty Twenties (Emily Morris again). One of the judges said: "It's almost impossible not to get drawn into the story that this blog tells."
Dual runners-up were I Thought I Told You To Wait in the Car (Richard Vivmeister Hirst) and Dave Hartley's Weblog (Dave Hartley).

Best Arts and Culture Blog: Run Paint Run Run (Ella Wredenfors). One of the judges said: "Opinionated, heartfelt and pleasantly rough-around-the-edges, a blog with an infectious enthusiasm for art."
Runner-up was The Manchester Hermit (Ansuman Biswas).

Blog of the Year: Lost in Manchester (still anonymous). This was awarded to the blog with the highest aggregate score in the competition. One of the judges said: "Quirky, original and focused, with an eye for detail. Putting the extra into extraordinary."

This here's a pic, from the MEN, of Emily Morris (My Shitty Twenties), Manchester Blog Awards organiser Kate Feld, me (me!) and Ella Wredenfors (Run Paint Run Run). Don't we make a splendid line-up in our posh frocks? And I like the height graduation. 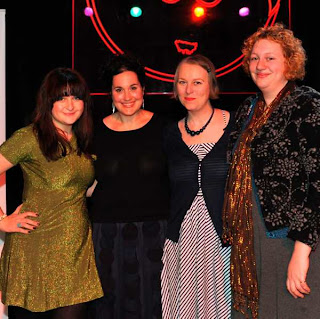 This big ole bunch of links is some of the stuff that has been written in The Press and on the interweb thingy (if you know of any more, kindly post a comment. I thank you).