As I'm sure you've all heard endless times already today, it's 20 years since the Berlin Wall came tumbling down; a pretty momentous occasion. No arguments there. For me, I was pleased to see the back of the Cold War as it had been the cause of some quite serious stay-awake-at-night worries of all-out nuclear destruction. As if being a teenager isn't bad enough. I don't suppose watching Threads helped, or listening to Frankie Goes To Hollywood with their Two Tribes sirens. And what about all the propaganda? We all knew full well that, in the event of an attack, we were to immediately take cover under the classroom tables. Like that was going to be a fat lot of use in the event of a mushroom cloud climbing high into the stratosphere over Manchester.

But back to Berlin, where I'm sure this day 20 years ago made rather more of a difference to ordinary folk but where life seems pretty normal now. Earlier this year, I had the pleasure of being able to pass through the German capital on my breakneck tour round Europe, and while pootling around on hire bikes got to see a few preparations being made for this very day. 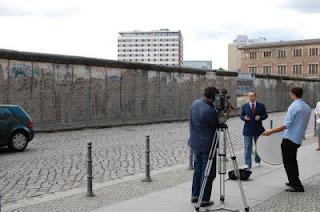 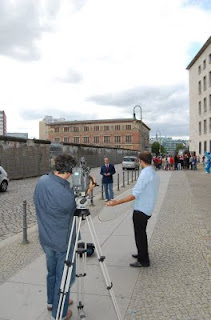 We sneakily took these photos of an Italian TV crew recording a programme near the one stretch of Wall that remains in situ. They were having to do the same take over and over again because various passing cars and people kept getting in shot. We thought the presenter was funny because he looked all smart and serious up top in his jacket and tie, but was wearing baggy jeans and white sneakers on his bottom half (presumably, they'll only be focusing on his head and shoulders on the programme, which is probably showing on Italian telly right this minute). 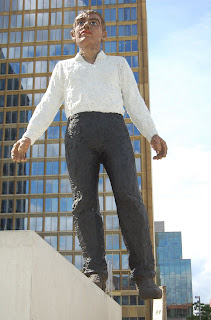 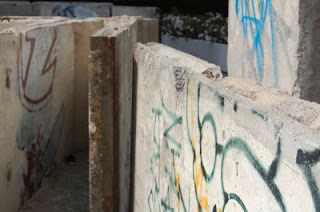 This is the new Balancing Act sculpture by Stephan Balkenhol, which was inaugurated in May and stands outside the Axel Springer Building, home of the Bild newspaper. The 5.70 metre-high piece of a man balancing on a wall is framed by 11 original pieces of the Berlin Wall and (so the official Axel Springer website says): 'in the heart of the capital of a united Germany, it symbolizes the power of freedom and self-determination'. Weirdly, we saw the same papier-mache-looking statue standing about in a foyer near the Brandenburg Gate. He obviously gets around.
Posted by Sarah-Clare Conlon at 6:08 PM