While in the kitchen rustling up a dangerously hot jerk sauce last night, I "listened again" to a programme that aired on Radio 4 yesterday morning. Mind Your Slanguage heard Rasta and performance poet Benjamin Zephaniah investigating the recent upsurge in street slang with a Patois slant; a very apt accompaniment to the Jamaican dish in progress, irie. 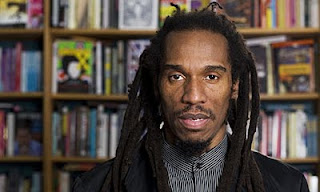 The programme kicked off in Manchester Academy (the educational establishment, not the music venue), where street slang was banned in 2007. Students had apparently been unaware that the colloquialisms they used in conversation and the text speak they used in writing were inappropriate for classroom discussion and exam papers. Since the ban, results from the Academy have reportedly gone through the roof.

Banning isn't good enough, various defenders of the Queen's English would have you believe, worrying that the language, like the country, is going to the dogs. Most sources quoted in the half-hour slot (including the right honourable Ann Widdecombe MP) insisted, however, that it's simply a question of being able to distinguish between contexts and communicating appropriately.

We all have different voices for different situations - using business jargon for business meetings, for example - so knowing when and when not to use them is the key. It's all about, to coin a linguistic term, "appropriacy". "Language users are inherently sophisticated - most people know how to switch code," said Tony Thorne of the Slang & New Language Archive at King's College London.

Thank goodness for that; a blanket slang ban has been averted. Wicked. Slang makes our language interesting, throws up fabulous new words on a regular basis and gives us a brilliant arena for self-expression, as creative writers like Mr Zephaniah know only too well.
Posted by Sarah-Clare Conlon at 2:02 PM